Saugatuck-Douglas, Home to LGBTQ Communities for more than 100 Years

How did the initiative to create an exhibit that narrated the history of the LGBTQ community in Saugatuck-Douglas come about? Why was it relevant to narrate this history?

An exhibit dedicated to sharing the stories of people living in the margins at the Lakeshore has been many decades in the making. Saugatuck and Douglas are two of Michigan’s most popular Lake Michigan summer tourist destinations and residential centers for people interested in history and the arts. From its origins as a lumbering and shipbuilding community in the 1800s, the area has built a reputation as a “home for all” with a significant LGBTQ population. In the late nineteenth and early twentieth centuries, steamship and railroad travel made the Saugatuck area along the Lake Michigan shoreline a resort and arts destination with people coming from Chicago, St. Louis, Detroit, and across the region.

The SDHC was established in 1986 to preserve local history and inspire learning to inform and improve our community. In the last 35 years, the History Center has published more than a dozen books and presented over 30 exhibits on Lakeshore history.

For more than a decade, the SDHC has worked to preserve and promote the LGBTQ history of our community. The Century of Progress exhibit is the culmination of many years and countless volunteer hours of work. We owe a debt to Dr. Jim Schmiechen, longtime Douglas resident and professor emeritus in history from CMU who led the research behind History Center exhibits and publications including the foundation of this project. 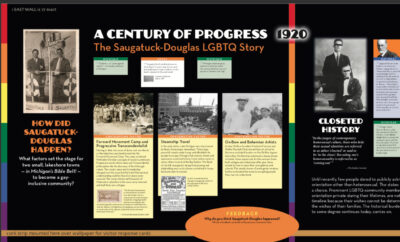 The History Center and Dr. Schmiechen launched the “Gay History Project” in 2006. This early volunteer effort recorded oral history interviews and gathered archival materials related Saugatuck-Douglas LGBTQ places like the Blue Tempo bar from the 1960s, the Douglas Dunes resort from 1981, to the present. Additional community outreach came from the 2018 collaboration with GVSU’s Kutsche Office of Local History on a Stories of Summer History Harvest project that yielded 40 hours of interviews and digitization of 2,000 photographs and documents.

Two events directly inspired the creation of the Century of Progress exhibit for 2020: one national and one local. The national event was the 50th anniversary of the Stonewall Rebellion in June of 2019. Exhibits and commemorations in New York and around the country gave prominence to LGBTQ history as nationally significant. Locally, the passing of gay trailblazer Carl Jennings in February of 2019 put a spotlight on the importance of remembering LGBTQ civic and community leaders. Carl and his husband Larry Gammons founded the Douglas Dunes Resort that put the community on the map in the 1980s and 1990s. They also made a lasting impact as philanthropists and community leaders.

This inspired the History Center to bring together a team of community volunteers to create an exhibit titled: A Century of Progress: 100 Years of LGBTQ History in Saugatuck-Douglas. The exhibit set in the front gallery of the SDHC’s School House presents a timeline of LGBTQ history with parallel tracks for local people, places, and events alongside examples from regional and national historic contexts. It was originally slated to open in June 2020 for the 50th anniversary of the first Christopher Street Liberation Day / Pride Parade. With the impact of COVID, the exhibit was moved back to open with suitable celebration on Labor Day weekend, 2021.

What does the Center hope to achieve with this exhibit? 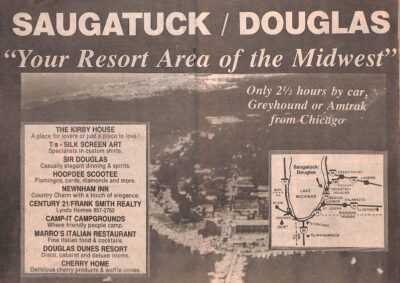 The timeline exhibit is the first step of a long-term effort to commemorate and celebrate the LGBTQ trailblazers that have made Saugatuck-Douglas the community it is today. One hope is that the Century of Progress exhibit encourages more people to share their stories. Oral histories have been an important part of the SDHC’s outreach from the 1990s to today and we are eager to add new voices to the story. On a related topic, we also expect that many people may have artifacts, personal papers, business records, ephemera, and photographs that document the lives of LGBTQ people in Michigan. We are actively working to build an inclusive historical archive that reflects the full diversity of those who call the Michigan Lakeshore area home. Finally, we see this exhibit as the source material for further research. The Century of Progress presents a community study that connects to larger themes from the geography of queer space at the Lakeshore, business history, arts and cultural history, and political history. We invite scholars to help interpret and articulate stories from diverse disciplinary perspectives and connecting Saugatuck-Douglas to larger themes and contexts.

In doing the research in preparation for this exhibit, what was the Center most surprised to find? Or what did you learn about this history that you were not expecting to learn? 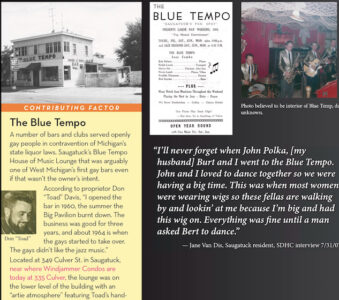 The team was most surprised to see how much information came to light in the last two years. There had been a sense that we wouldn’t have enough primary source material to assemble an exhibit focused on LGBTQ history. That has not been a problem! If anything, the exhibit has rapidly filled the available gallery space. The second surprise, related to the first, is that events in the recent past are much closer (and more significant) than we perceive. For many people, events from the 1990s seem recent, but time marches on, placing those events in fresh context with 30 years of hindsight. In terms of LGBTQ history, history has also moved quickly. Consider that “Don’t Ask Don’t Tell” was official policy in 1994; Marriage equality seemed out of reach for decades until April Deboer and Jane Rouse won their case before the US Supreme Court in 2015 making marriage for all legal across 50 states. (We were surprised to see how the local and the national meet in Saugatuck, too!).

Michigan Humanities had the opportunity to communicate with Glenna DeJong and Marsha Caspar, a Saugatuck couple, and the first couple to be married after April Deboer and Jane Rouse won their initial court case in Michigan (before it was overturned by the 6th circuit Court and then that decision reversed at the Supreme Court), and they were able to add more insight into their case. They told us:

“Governor Snyder wouldn’t recognize our marriage, so with the help of the ACLU, we sued (Caspar v. Snyder) and won our MI case to recognize the 300+ marriages that took place that day, before the State put a stay on the first court ruling.”

The fight for making gay marriage legal and gay rights did not stop when Glenna DeJong and Marsha Caspar were legally married in 2014. There were subsequent bans and appeals that made it illegal for same-sex couples to be married during 2014 until eventually in 2015 the US Supreme Court ruled in favor of gay marriage. Nonetheless, the battle for comprehensive gay rights is one that it is still underway. We invite our community to dive deeper into these issues affecting communties in our State.

Michigan Humanities is committed to supporting projects that are led by, collaborate with and support communities who have been traditionally underrepresented and whose histories remain largely untold. We invite you to keep updated on the opening date for this exhibit and other exhibits available through the Saugatuck-Douglas History Center by visiting their website.