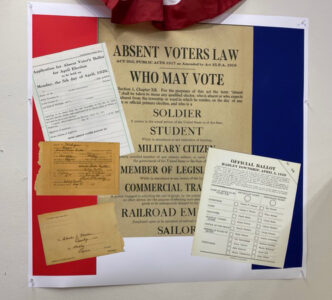 Museum on Main Street brings high-quality Smithsonian traveling exhibitions to Main Street museums, historical societies, and other small-town cultural venues across the country. These traveling exhibits are crucial for generating senses of deep historical rooting, ownership and belonging in our communities across the State of Michigan. Our 2021 Museum on Main Street exhibit: Voices and Votes: Democracy in America was centered around the questions that the American revolutionaries who waged a war for independence put forward to concretize their vision about what an independent American nation should look like, and how these questions continue to frame our nation today. The Center for the Arts of Greater Lapeer was one of our selected locations and partners to bring the 2021 exhibit to the city of Lapeer. In this blog, we talked to the Center’s Executive Director, Jill Lyons, who told us about the Center’s experience hosting this exhibit with both its perks and challenges. In 2023, Museum on Main Street has a new exhibit called Spark! Places of Innovation, more information on this exhibit is forthcoming. We hope that the meaningful experience of the Center for the Arts inspires others across our state to host these exhibits. After reading this interview we invite you to learn how to become a host here.

What motivated The Center for the Arts of Greater Lapeer to want to host the 2021 Museum on Main Street Voices and Votes exhibit? 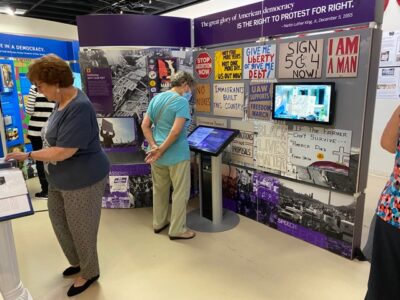 The Center for the Arts applied to host Museum on Main Street Voices and Votes for two reasons. The first was to bring light to the amazing story of the vote that made the City of Lapeer the County seat in the newly formed State of Michigan. The second reason was the exhibit was a wonderful compliment to another Center for the Arts Humanities grant project about the Women’s Suffrage movement. The Suffrage project had been derailed due to the pandemic. The timing of the Voices and Votes exhibit in Gallery 194 aligned with the rebirth of the Suffrage project, titled It Happened Here, playing next door in The PIX Theatre.

How was the experience of hosting this exhibit in the City of Lapeer?

Hosting Voices and Votes was an incredible journey. The primary reasons for hosting came to fruition in a wonderful way! Yet, there were so many other unimagined opportunities and discoveries that came to light by hosting this exhibit as well. The State Scholar did an amazing job, telling the story of the vote that sealed the City of Lapeer as the County Seat. He intertwined the story with what was happening nationally at the time. He explained what the motivation of the early settlers was to come from the east to the wilds of Michigan. 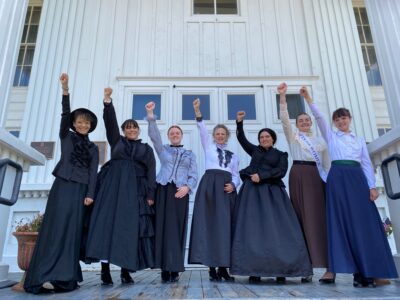 Survey results showed that the majority of patrons that visited the exhibit also came to see It Happened Here. Part of the local exhibit for Voices and Votes was a timeline we created that showed the Women’s Suffrage movement nationally, on the state level and on the local level here in Lapeer County. The timeline became one of the highlights of the local exhibit and has been offered to Lapeer County Community School teachers for use in their classrooms.

Other highlights of the local exhibit were actual ballots from elections as far back as 1847. The women’s voter registration book from 1919, the year the 19th Amendment was passed. The signatures in that book were ancestors of many people still living here in Lapeer. Also on display was the men’s voter registration book from that same era. There was something so incredibly moving seeing those signatures from over a hundred years ago, exercising their right to vote.

Were there any challenging aspects in hosting the exhibit? What were some rewarding moments?

The Voices and Votes local exhibit proved to be more challenging than a previous Museum on Main Street exhibit we hosted; Hometown Teams. Evidently voting isn’t as popular or sexy as sports. An understandable fact, but a sad fact, nonetheless. Fortunately, fate intervened and a woman in the village of Hadley, in Lapeer County, was cleaning out her mother in law’s attic and found a box of voting history from the village. The contents of that box became 50% of the local exhibit.

It was hard to guess how many patrons were going to come out to see the exhibit. The lack of people donating to the local exhibit, coupled with the fact that we are still in the midst of a pandemic, meant there was no way to calculate what the attendance would be. It was a pleasant surprise to see how many people came to see the exhibit; there was a constant stream of people every day of the exhibit. All ages were represented; families with young children to senior citizens. We had patrons that returned two or three times so they could read everything the exhibit offered and watch all of the videos.

Would The Center for the Arts want to host another Museum on Main Street exhibit?