On the Table: Stories of Food and Change in the Northwestern Michigan Region

During this holiday season, many of us come together to share food and exchange stories. One of the main principles that Michigan Humanities seeks to promote across our state is ‘telling stories.‘ We believe that telling stories is crucial for making human connections and generating understandings about who we are and understanding those around us. For this blog, we wanted to feature a recent project funded by the Humanities Grants: On the Table (OTT): Stories of Food and Change, this project takes on the theme of story telling and focuses specifically on documenting stories about food in the Northwestern region of our state. This project sponsored by the Groundwork Center in Traverse City, seeks to capture in short documentary video format the diversity of stories in Northwestern Michigan around food production, (unequal) distribution, consumption, and the overall changing relationships of people and food. We invite you to learn more about this project in the words of Robert George, one of the project’s creators, below.

Tell us about On the Table (OTT): Stories of Food and Change project. Who are the storytellers in this project? What kind of stories are they telling? 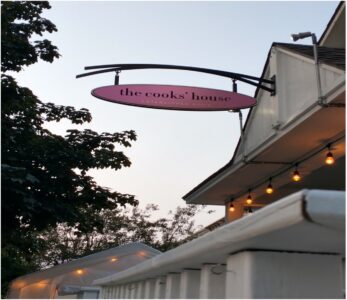 On the Table emerged from conversations that Becky Tranchell, my project partner, and I started having several years ago. At that time, we shared an office when we were both teaching culinary arts. Between classes, while we often talked about teaching, we found our conversations increasingly focused on food and work, its many forms, who’s doing it, and why. Around the same time, I came across David Graeber’s 2013 essay, ‘On the Phenomenon of Bullshit Jobs’ (later a 2018 book, Bullshit Jobs: A Theory), which caused me to think about how some work is more meaningful (and perhaps more essential for the rest of us) than is other work. So, increasingly, Becky and I kept returning to the questions: Why do people do the work they do, day after day, especially those working with food? And how does that work intersect with our community? And the pandemic made all of this more relevant, at least for us.

For On the Table, food is not the subject but rather the entry point for exploring community and meaningful work and any number of other topics. We knew there were stories about food and community in our region, lots of them, and that short documentaries would be an accessible way to surface them. And, like Studs Terkel’s oral histories, we understood that these stories would be best told by the subjects themselves, in their own words.

In our first two stories, “In the Cooks’ House” and “Daily Bread”, we hear from two distinct perspectives on making and serving food in our community. In the first, Jen Blakeslee and Eric Patterson, owner-operators of the celebrated Traverse City restaurant, The Cooks’ House, speak to the rewards and costs of a career in restaurant work, gender issues in professional kitchens, and the role a restaurant can/should play in its community. Our second episode, Daily Bread, takes a very different perspective by exploring food insecurity in the Traverse City region. In this episode, we hear from Jane Lippert, a minister at Traverse City’s Central United Methodist Church, along with volunteers as they prepare and distribute food (and other services) in response to area food insecurity. Daily Bread explores the intersections of food, community, and the idea of service.

While the documentaries are very short, the viewer will get a sense of who the storytellers are and what they are doing; in both aforementioned episodes, viewers will see vibrant and engaged community members. And the stories captured on camera will be made possible by Mia Hagerty and Grant Piering, the two creative and skilled videographers who we are fortunate to be working with on the project.

How do you see the relationships between food and community changing in Northwest Michigan?

Northwestern Michigan is changing, especially in and around Traverse City. It wasn’t too long ago that Traverse City could be seen as a sleepy, summer tourist area, with significant regional farming. Now the area is seen by many as a “food destination,” with the resultant changes in expectations. The number of restaurants has grown, so too has area wine, beer, and spirits production (and, presumably, consumption). Similarly, we are also seeing increased interest in local and organic farming, local food systems, and in building community resilience (which gained particular attention with the onset of the pandemic). Interestingly, with all of that going on, there is also growing awareness of and interest in the connection of food and health and in aligning the use of healthy foods with building a healthier community.

These and other changes have helped to create an environment in which food (and wine, etc.) has become more a part of the area’s identity, much like cherries have been for many years.

What challenges do you see resulting for Northwestern Michiganders and their relationship to food?

While much of the aforementioned is positive–who doesn’t want fresh, locally grown foods (assuming they’re affordable)–challenges remain. Some of these challenges are exacerbated by our changing relationships with food. While the area may be seen as a food destination, for example, the food service sector, even before the pandemic, found it difficult to find sufficient staff. Among other issues, food service (waiting tables, cooking) has a history of low wages and few benefits. And the pandemic laid bare many of these issues. While wages for food service work in the area have gone up, staffing shortages remain – and new eateries open thereby increasing demand for labor.

Another challenge that has not changed and perhaps has worsened, is food and nutritional insecurity in the area. There are many dedicated people and organizations working, often collaboratively, in response to this issue, but the demands continue. At the same time, there have been some creative responses. One of which is the Michigan 10 cents a Meal for Kids and Farms match program, which I believe was created and piloted by the Groundwork Center for Resilient Communities. This program provides a 10-cent match per meal to schools to help them purchase Michigan produced fruits and vegetables, thereby supporting both student nutrition and Michigan farms. (And I should note that Groundwork is our sponsor and that the center’s Paula Martin was an early advocate for our project.)

Finally, I suspect that many people don’t know or have good understanding of where their food is coming from, and the work associated with its production, distribution, etc. It is hard essential work. Here, again, I think of David Graeber’s writing on meaningful and essential work: we know what would happen if crops were not harvested, or shelves not stocked, etc. We need to think about and value that work more and the people doing it.

How does people telling their own stories about their intersections between food and community have an impact in overcoming the aforementioned challenges?

Becky and I have not set out to solve problems or create pathways through which a particular challenge could be overcome. Rather, by using food as an entry point to examine work and related issues, we want, in part, to increase awareness of what is essential and meaningful work. And that, I think, will be reflected in our first two stories, “In the Cooks’ House” and “Daily Bread.” Additionally, stories we are developing that focus on waiting tables and tipped wages (primarily at area diners), the essentialness of migrant labor, and local agriculture will build upon those first two episodes.

Finally, while not necessarily part of the Michigan Humanities grant, On the Table expects to hold a community evening(s), during which two or three of our films will be shown, followed by a panel discussion of stakeholders, and then a social hour with local foods. Again, such an evening would be another opportunity for people to tell their own stories–and perhaps create a point of civil discourse that can help build understanding, empathy, and imagination in our communities as we confront challenges and exchange ideas.