Kathryn Gross, Project Director for Never Alone in Detroit, has over 30 years of experience in education.  She teaches at Loyola High School in Detroit, and is an adjunct professor at the University of Detroit Mercy.  Developing curriculum and support systems for underserved populations in the City of Detroit, she continuously finds herself amazed by the gifts and talents of the students she meets. Her project, funded in part by a Heritage Grant from MH, resulted in a 40-minute documentary featuring the voices of mothers raising young men in poverty in Detroit. In this post, Kathryn discusses the experience of interviewing women for the film.

Each person we meet in life has a unique story. That was apparent on the day we began the first interviews for our project Never Alone in Detroit. We knew that the obstacles African American women alone raising young men in Detroit were great, but the severity of these challenges suddenly became more real as we encountered one story after another. The stories of abandonment, poverty, and pain are a backdrop for the fears and hopes these mothers have for their sons. Statistics and media often inform stereotypical stories of  young black males in Detroit, but the women who raise them feel the pain of these stories, and live the day to day reality.

Applying for MH’s Heritage Grant inspired us to delve further into the stories and find the human element underneath the statistics.  Each story opened our hearts and tore away at walls of preconceived expectations.  The process developed quickly. Although we often faced challenges in obtaining quality due to technical problems involving audio, and the limited availability of the women we interviewed resulted in many more sessions than originally planned, each story we heard motivated us to do more and awakened a desire to hear more.

One of the most heartbreaking statements we heard was from a woman who said her biggest fear is her child growing up to be like her — those words made tears fall.  She did not realize the strength and good within herself.  A common fear, which almost every woman shared, was receiving “that phone call” saying her son was injured or killed. Such expressions jolted us into the reality of being a mother in Detroit.  This was the most heartbreaking work I ever did, yet most inspiring.  We wanted everyone to hear each of the complete stories but it would have been 40 hours of video, so we spent most of the time on the project editing to get the best of each in a method that would be most beneficial for the viewer to see the reality and what is human rather than a statistic.

Listening to these women tell their stories formed a bond between people who were otherwise strangers, reminding us that there is a common struggle and common goal to which we can all relate. The goal of community support truly was met by those participating, and those viewing the film and reading the stories were in awe. The hope is that teachers, administrators, service providers, and agencies will look deeper into the hearts, challenges and fears of this community of women who feel abandoned themselves, but will never abandon their sons or grandsons. Indeed, their sons or grandsons will never be alone in Detroit because there is a remarkable community of African American women to support them. 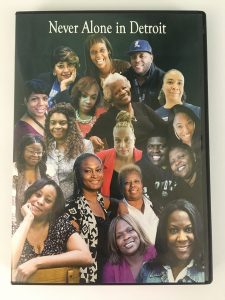 For more information on Heritage Grants and current and past projects, please visit:  https://www.michiganhumanities.org/heritage-grants/