In 2015, the Grand Rapids African American Museum and Archives became a recipient of the Michigan Humanities Heritage Grant. Michigan Humanities wanted to reconnect with George Bayard III and share some of his experiences as a filmmaker and museum director. George is an artist, owner of Bayard Gallery of Fine African American Art & Books, and founder of the Grand Rapids African American Museum and Archives (GRAAMA). George is native to Delaware where he attended the University of Delaware to pursue a degree in Arts and Education, which led him to become involved in the world of art and picture framing. He moved to Michigan 33 years ago in 1988. In Michigan, George has been an active and committed community member devoted to African American history and material culture.

How did you become involved in film and documentary making? 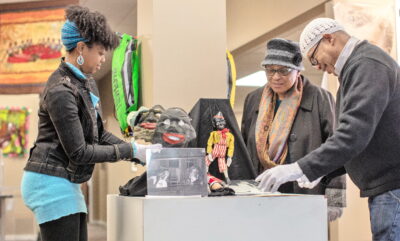 I am an artist by trade so an early exposure to the arts was always part of my upbringing. When I transitioned from the arts to humanities after 30 years owning a gallery/frame shop, collecting, preserving, and displaying artifacts became my love.  Only after I began collecting my history through the West Michigan Genealogy Society did I realize how much of my past was not documented by my elders. Then I was asked to record for StoryCorps and found the power of spoken history and how much film could enhance the narratives. I realized that these bits of stories from residents could bring new light to the storyline of Grand Rapids and always be a source of information for our new museum.

Can you talk about the Grand Rapids African American Museum & Archive and share how this project developed? How would you describe the experience of having this museum open for the past 5 years? How is the museum faring during the COVID-19 pandemic? 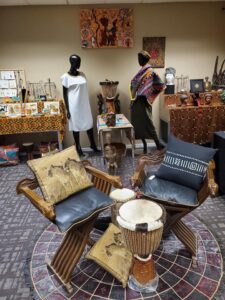 When we had Bayard Gallery and Books, people were always coming in with objects to sell or be appraised so our collection grew quickly with local artifacts that told family or regional history. We created a touring exhibit (The Underground Rail Roadshow) which allowed us to show the collection around the region. At one of the Ethnic Festivals at the Grand Rapids Public Museum, we were encouraged to find a permanent place and set up a museum. We converted from for-profit to non-profit and set up Grand Rapids African American Museum and Archives (GRAAMA). I purposely wanted that acronym to honor my grandmother who got me interested in collecting after I moved into her house when I lived in Wilmington, Delaware, before moving to Michigan. The City of Grand Rapids found our current location and we opened for ArtPrize, then kept the spot as our museum. It has been 6 years now and we have outgrown this space even after a pretty rough year being closed for 5 months due to COVID-19. We have received a few grants to tide us over until Spring. During the 2020 uprisings following the killing of George Floyd and Grand Rapids native Breonna Taylor, we had protesters protect the museum from vandalism, a gesture that denotes ownership.

Can you share with us a little about the “Grandma’s Voices” project? What was this project about? How was the process of developing the project? 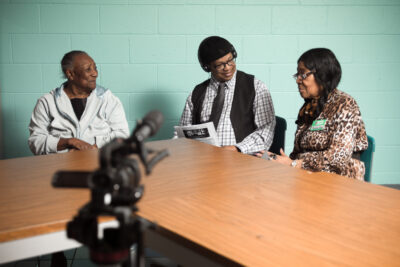 The Grandma’s Voices Oral History Project was funded by a Heritage Grant through MH and the W.K. Kellogg Foundation and was our first program grant. My grandmother died before she could identify the thousands of photographs I found in her house. So, we became focused on documenting the oldest members of the African American community here. As I stated, after participating in StoryCorps we realized the necessity to videotape people to create a permanent record of events from those who lived through the early 1900s up to the present day. We established a film crew, contacted nursing homes and churches, and ran ads to identify the oldest members. We scheduled a time to film, then edited the footage. We were novices and had a lot of trial and error but soon refined our technique to professional quality.

What challenges do you face as a filmmaker trying to retell the histories of your own community from the perspectives of community members who either lived these histories first hand or whose histories have been recounted to them by their grandparents and elders?

Unfortunately, our early challenges were simple issues like scheduling and equipment. We lost an opportunity to film a 105-year-old woman and a 103-year-old man who both passed away before we could get to them. We did not have our equipment so our local Community Media Center leased cameras and editing equipment to us, which caused a learning curve since they were changing from tape to digital cameras. Since our subjects were elderly, some did not remember details so our producers did a lot of fact-checking. We did not have much trouble with the content of most interviews, the stories flowed nicely. However, keeping them focused on an answer to a specific question was a challenge sometimes. We found that good editing trumps a rambling interview. It worked to our advantage in a few cases. We interviewed a woman about quilts and at the end while packing up, she mentioned working in a plant the made the atom bomb that destroyed Hiroshima. We learned to keep the camera running.

What do you think is effective or unique about video form as a medium for history telling and/or retelling?

Film or video helps to tell a more complete story. It conveys emotion from the person being interviewed. There is also an inter-reaction if more than one person is being filmed. In our case, these archives might be the last interview the individual gives.  One interview we did tells how a woman’s grandfather had his land stolen in Mississippi by the Klan, and was threatened to be lynched, forcing the family to move to Michigan with only the clothes on his back. It was considerably more powerful to see her face as she recanted this personal narrative. She also created a story quilt about the incident which added more to the conversation that would not be available with only an audio recording.

What projects are you working on right now? Are you looking forward to any specific project?

Since the original Grandma’s Voices, we have expanded the project to about 85 interviews. We have collaborated with many groups on different video projects: “Rhythm and Race” with the students of West Michigan Center for Art and Technology,  “1000 Pictures” with Grand Rapid Public Library, and Brushback Negro League Baseball with Grand Valley State University. Our leading documentary was “Riot Race and Reconciliation the 1967 Grand Rapids Uprising” which was completed for the 50th anniversary of the protest. It added voices never heard at the time and over 50 years to clarify the confrontation during the summer of ’67. Our current work elevates GRAAMA to a new level as we have become co-producers of a major documentary based on the book by Todd Robinson, City Within A City; The Black Freedom Struggle in Grand Rapids Michigan. This book was pronounced book of the year by our mayor and used in many college courses. The rest of the team is Emmy Award-winning including Grand Rapids’ own Dante James who received an Emmy for the PBS series, Slavery, and the Making of America, narrated by Morgan Freeman. They will be using our footage and archives and will give the Grand Rapids African American Museum and Archives plenty of notoriety.

Michigan Humanities invites you to learn more about GRAAMA on their website.