Breed & Bootleg: Legends of Flint Rap Music is the new documentary of Dr. Geri Alumit Zeldes, a professor in Michigan State University’s School of Journalism and a long time partner and grantee of Michigan Humanities. We wanted to talk to Geri about her new documentary and her ongoing work on the history and contributions of the Flint music scene. Geri first became inspired to pursue this topic when attending a Heritage Grants Convening at the Lansing Center in 2017. She recounts that the gentleman sitting next to her who was just finishing a film on Grand Rapids’ music history encouraged her to look into music in Flint, beginning with MC Breed and Ready for the World. Little did she know then, that this suggestion would turn into the documentary Breed & Bootleg: Legends of Flint Rap Music  and her ongoing commitment to excavate the legacies of Flint rap music which have been crucial in giving birth to important rap figures we recognize today in mainstream culture. These stories of collaboration and camaraderie are a testament to the kind of community we foster through Michigan Humanities. Please join us in reading our interview with Geri.

Why was it important to tell the stories of MC Breed and Bootleg? 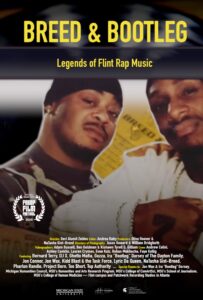 MC Breed and Ira “Bootleg” Dorsey of The Dayton Family deserve a spotlight because of their roles in the early 1990s in cultivating rap music in Michigan and more broadly in the Midwest. Journalists note MC Breed as the first commercially successful rapper in the Midwest, skyrocketing in 1991 to national Billboard charts with “Ain’t No Future in Yo Frontin” with the DFC or Da Flint Crew. In the meantime, Bootleg was pioneering gangsta rap in the region and would become rich in discography as a member of TDF and as a solo artist.

Fast forward 30 years later, time has layered with dust MC Breed and Ira “Bootleg” Dorsey’s contributions. It is important to retell MC Breed and Bootleg’s stories because their narratives are unknown to a new generation of Flintstones. It’s time to excavate their legacies to lock their places on the rap map even though geographically, Flint is landlocked, placing them at a disadvantage when it comes to the larger cities of Detroit and Chicago that dominate music production in the Midwest. It is time to re-show that MC Breed and Bootleg’s influence connected beyond the ends of I-96 and M21, extending to the East Coast, West Coast and the Dirty South or southern hip hop, often referred to rap stylized in Atlanta, Houston, Memphis, Miami and New Orleans. MC Breed collaborated with West Coast rappers 2Pac and Too $hort in Atlanta and brought them to Flint. In Breed & Bootleg, Too $hort talks about how MC Breed is the beginning of the story of rap music in Michigan, and others who are interviewed remark that MC Breed gave the world its first look at 2Pac with their duet of sorts “Gotta Get Mine.”

What is the Midwestern rap style?

The Midwest rap style is eclectic, beginning in the early 1990s as a mix of funk, soul and pop influenced by the rhythm and blues of Flint group “Ready for the World.” In 1991, MC Breed and DFC’s breakthrough, gold-selling single “Ain’t No Future in Yo’ Frontin’” sampled “Funky Worm” (1972) by the Ohio Players and “More Bounce to the Ounce” (1980) by Zapp. As you listen to “Ain’t No Future,” you find yourself nodding your head in tempo, moving to MC Breed’s lyrics as he rides, almost sings to the beat. In contrast, Bootleg and The Dayton Family as well as Top Authority, a hip hop trio out of Flint, laid the foundation of trap rap, characterized by a fast lyrical tempo and subject matter involving the harsh realities of the crime-ridden streets of Flint.

I’ve grooved to Old School hip hop since it was New School. I grew up in Flint and knew about MC Breed and The Dayton Family, but I began to do double-takes on rap music in Flint as I began noticing voids in scholarly and creative content on the subject.

Unfortunately, in recent years the city of Flint has become widely known for their tragic water crisis, what do you wish for your documentary to add to the image and stories we tell about Flint? 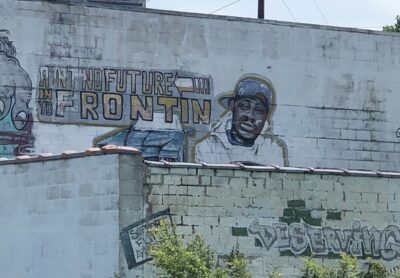 As a lover of documentary film, especially Breed & Bootleg, 🙂 I want the film to entertain and make Flintstones proud of their artistic past. I also want the film to be an alternative narrative to the frames of Flint as a victim of environmental, social and economic injustice. I also want those who watch the film to appreciate what happens when cities and states invest in the arts in our schools as was the case in Flint decades ago. Arts programs and talent shows at the middle and high schools gave rise to the young MC Breeds and Bootlegs.

What remains untold after making the documentary that you wish to have told? We know you are currently working on your book, Flow and Flint Town, expected to come out in 2022. Will we see some of these untold histories in this book?

The book will be an examination of two kinds of flow, musical and mental. Musical flow is the poetic delivery of the lyrics while mental flow, synonymous with the term “being in the zone,” is the creative state of mind one reaches when the task becomes easy and optimal. For the book, I re-interviewed a few sources in the film Breed & Bootleg such as legendary music producers Bernard Terry and Pharlon Randle as well as Flint rapper and DJ Brady “Gozza” Gasser to get their deep dives into musical and mental flows.

I have also interviewed other Flint rap stars who are NOT featured in the film such as Mama Sol, Mona Haydar, Fernando Vega, Joe C. Ryan III, Nicholas Shemes, and Steven Banks; they represent the richly diverse constellation of hip hop artists, established and new. These interviews, I believe, will reveal untold histories of an emerging rap subgenre of Flint and the Midwest.

Michigan Humanities invites you to learn more about this documentary by accessing the website raponflint.com.