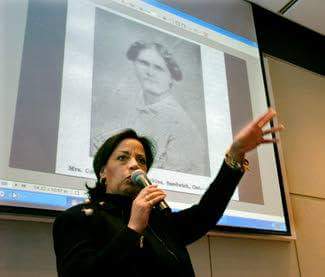 This month, we had a conversation with Kimberly Simmons about her work with the Detroit River Project which is running a strong and thoughtful campaign to recognize the Detroit River as a UNESCO World Heritage Site. Kimberly Simmons is the Executive Director of the Detroit River Project and a long-time advocate for telling the important histories of Michigan. Her 15+ years of commitment to telling the stories of Michigan and highlighting the participation of African Americans in the making of our state and in crafting complex meanings of freedom, were recognized this year by presenting her with the Humanities Champion of the Year Award from Michigan Humanities. We are honored at Michigan Humanities to celebrate Kimberly’s work and passion for telling OUR story.

In our conversation, Kimberly tells us how the Detroit River was central for the Underground Railroad network and the achieving of freedom. Moreover, the Detroit River became at various points in history and today, the embodiment of freedom and life. As such, it deserves the world’s recognition as it tells the story not only of Detroit but of the transformation of the world as we know it today (e.g. civil rights, car manufacturing, pollution, and restoration efforts). We invite you to read our interview with Kimberly and we hope that after reading it you feel great pride in our state!

Kimberly, tell us, how did the Detroit River Project come about, and what does it seek to do? 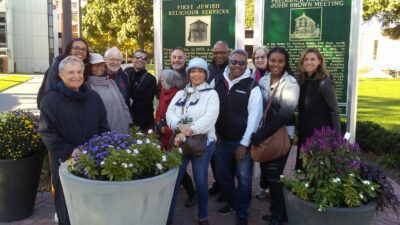 Since 2003, I have been a National Program/Site Partner of the U.S. National Park Service Underground Railroad Network to Freedom. This program was established by the National Underground Railroad Network to Freedom Act of 1998 (P.L.105-203). In this role, I have written three site designations, of which most recently was the designation of the Skillman Branch of the Detroit Public Library in Detroit in 2016 (you can find the listing here). As a Network to Freedom partner, I was asked by the NTF Regional Manager to take on the task of authoring other historic sites in Michigan after completing a site designation in Milwaukee on behalf of the State of Wisconsin in 2005. This was because Michigan was not well represented in the program and is very well known historically as the most active “terminus” in the U.S. in particular with the International Border being the goal for freedom seekers who were looking for safety out of the hands of authorities in the U.S.

I made the decision to go after the extremely significant Detroit River site and was encouraged by Parks Canada; the Canadian counterpart to the U.S. National Park Service to consider a loftier goal than a National Historic Site/NTF Site. As any historic designation, it needs to have the permission of the property “owner,” so I was obliged to ask for such from the Canadian Government as it is an international border shared by the U.S. and Canada. The World Heritage Site designation bid was born at that time in 2008. I also happened to be a sitting commissioner for the State of Michigan on the Michigan Freedom Trail Commission and offered the proposal as a strategy for the State of Michigan. But, after my term expired in 2010, I was left to “take on the cause” alone. I have been working toward the realization of the vision since then.

Why does telling the history of the Underground Railroad in the Detroit River Borderland matter today and in what ways does it need to be retold? 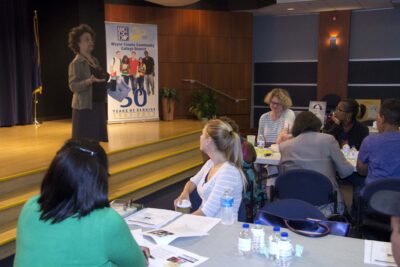 As a 5th Generation Underground Railroad descendant of a family that found freedom here in the Detroit River Region in 1835, I am very much aware of the history and significance that is attached to the story of freedom in this region. This Detroit River region being the “terminus” to several “migrations” in U.S. history to include the Underground Railroad as personal freedom and of course the economic freedom that came from the Great Migration. In the U.S., nearly 5 million people were enslaved at the end of the U.S. Civil War in 1865, and nearly 100,000 freedom seekers in the U.S. used the network known as the Underground Railroad. Historians approximate that somewhere between 25,000 to 30,000 of those seeking freedom escaped across our Historic Detroit River. That is a quarter to a third of those who escaped, using the Underground Railroad as it pertains to the Detroit River. The story of civil disobedience in the form of the Underground Railroad is considered historically the beginning of the Civil Rights movement, along with the migration of peoples towards the “north” that were heading towards a perceived freedom—a tale retold many times in many ways. But, the sheer courage of many peoples: old, young, Black, white, Indigenous, enslaved, and free born towards the goal of freedom and justice continues to be a distinct characteristic of this region’s peoples, and it is not a story often acknowledged.

We have moments in time in which justice has not always been served, however, we are still driven to continue to strive toward equality and inclusion in what has always been a very diverse region. Our region has some of the largest and most diverse immigrant populations in the country, and it is because of this region’s historical openness to diverse peoples and the ingrained activism of our people that result in our consistent search for that elusive thing called justice. We have activism in our collective DNA, and the story of the Underground Railroad is OUR Story.

What have been some of the most gratifying moments in your work re-telling and re-valorizing the history and value of Detroit River? 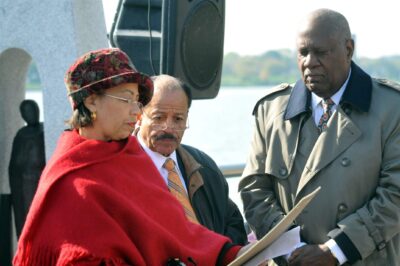 Of course one of them was on the Wednesday morning when I was told that I had secured the honor of being named the “2022 Michigan Humanities Champion of the Year”, but there have been a few others. I am the collaborator in several books and Co-Author of one other so seeing yourself in print the very first time in a bookstore and library is a thrill when you are telling the story of the place you call home. You can find these books under the tittles: To the River, the Remarkable Journey of Caroline Quarlls A freedom Seeker on the Underground Railroad and Ride, Cycle the World.

I will also say that another significant moment was when the Detroit River Project and its central mission of working towards World Heritage designation for the Historic Detroit River was officially supported by the UNESCO Routes of the Enslaved Peoples Project (formerly the UNESCO International Slave Route Project) in June 2022 during a meeting of the International Scientific Committee. The Detroit River Project has been bestowed with four U.S. Congressional Resolutions, the latest in October 2021 introduced by Congresswomen Tlaib and Lawrence, official support by the Consul General of Canada – Detroit, Joe Comartin in February 2022 and most recently, a Detroit City Council Resolution in April 2022 delivered to me on the same day I was asked to meet the National Park Service Director, Chuck Sams.

However, my most gratifying moments over this 15+ year journey continues to be the moments that I speak to students and tell stories or talk of the history of the Underground Railroad and its distinct tie to our Detroit River Region, as well as the heroes that are part of OUR Story or as I say to them: THEIR Story and their faces light up with wonder, excitement, and eventually pride about the place they call home.

Here at Michigan Humanities we are so happy to present you with the Humanities Champion of the Year Award, how do you plan to celebrate this recognition? 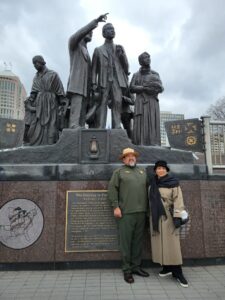 I work a lot! I spend most days working, so I have been “pushed” by the Detroit River Project Board and Advisors to take a moment and celebrate the 15+ year journey. We will have a celebration at the end of September. We will have an evening off celebrating before getting back to work, and our funding search continues!

And finally, we wanted to know what is next in the near future of this project?

The Detroit River World Heritage Designation work is focusing on 2027. The 2027 date is the point when both the U.S. and Canada will be open to promoting sites to the UNESCO World Heritage Convention and its International Scientific Committee. The site would be in consideration for “tentative listing” which could be as short as 3 years or could stretch longer as it is the Committee member’s decision to decide the fate of any application for site designation. As it is a joint application between Canada and the U.S., the coordination and research is extended between the two countries and the “sign off” for the application is country to country with the Canadian Ministry and U.S. State Department taking the lead.

We currently have a curriculum entitled, “Along the Fluid Frontier: The Detroit River Project International Educational Curriculum” that is a partnership with the University of Michigan School of Education. It is currently in pilot stage with 23 educators and 500 school children in six School Districts on both sides of our International border. In the Winter term of 2022–23, the University of Windsor will be joining the pilot as undergraduate students will join the currently 7th and 8th graders in creating an end of curriculum project that will follow its current incarnation to be exhibited in local museums. The students in the Amherstberg Schools (Ontario) have some of their projects on exhibit in the Amherstberg Freedom Museum after a presentation was done for the staff, Board Members, and administrators of the school district in May of last year. The curriculum was also created with and used as a resource for our volume entitled, “The Fluid Frontier, Slavery, Resistance and the Underground Railroad in the Detroit River Borderlands” published by WSU Press in 2016. I was one of the contributing authors along with 11 other binational authors that included Pulitzer and Frederick Douglass winning author and historian, Dr. David Blight, a Michigan native who wrote our “Forward”.

We are also in the planning stages of a Mural Project with a historical intent to tell the stories around our river to coincide with our International Freedom Corridor intended to expose the “route to freedom” that was used on both sides of our International Border.

And of course, we are currently in fundraising mode!

Michigan Humanities invites our readers to check out the Detroit River Project website and the large resources available on this site to learn more and donate.