This traveling exhibit examined the history of treaties signed by the United States Government and various Tribal Governments in Michigan. These documents created legally binding agreements between nations. In return for concessions from the Tribal Governments, usually land, the United States Government was obligated to provide the signers’ nation with compensation. Compensation might include money, services, reserves of land, or rights. Some of these obligations were one-time occurrences while others, particularly the rights preserved or granted in a treaty, were often perpetual. American Indian treaty signers, as well as all of the members of their community and all their descendants, hold these rights. 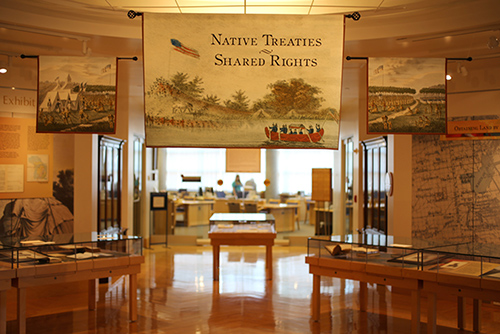