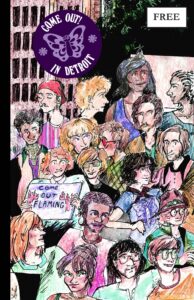 “Come Out! In Detroit” is an ongoing project led by illustrator Isabel Clare Paul and historian Tim Retzloff that brings the story of Michigan’s first-ever LGBTQ+ Pride celebration in June 1972 to life through a fully illustrated, 32-page nonfiction comic book for free distribution. This is an intimate comic book that includes the oral testimonies of eyewitnesses from this event and the wonderful illustrations of the talented Isabel Clare Paul based on photographic record and her own talent for capturing the spectrum of earlier queer lives. This comic book is out and ready for distribution and it marks an important piece for Detroit’s and Michigan’s history. In June 2022, Michigan celebrates the 50th anniversary of its first LGBTQ+ Pride celebration, and here at Michigan Humanities we wanted to celebrate it by speaking to Isabel and Tim about their ongoing project. Tim and Isabel received a Humanities grant in the Fall of 2021 for this project and we are happy to reconnect with them and continue to support this project. We invite you read the complete interview below.

Tell us about the Come Out! in Detroit project, what is this project about?

Come Out! In Detroit tells the story of Christopher Street Detroit ’72, the very first LGBTQ+ pride celebration in Michigan held 50 years ago this summer. It is a free, full-color non-fiction comic book based on such eyewitness sources as personal oral histories, diaries, organizational minutes, and published accounts in the mainstream, campus, underground, and gay newspapers of the time. 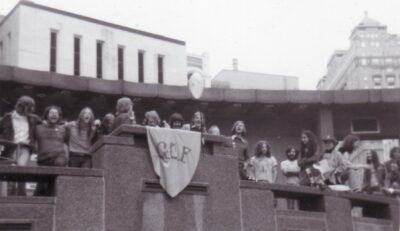 Why is Michigan important for LGBTQ+ history and organizing?

Michigan in many ways was on the vanguard of the gay liberation movement of the 1970s. The first university office in the country dedicated to gay and lesbian services was begun in 1971 at the University of Michigan. Ann Arbor and East Lansing were the first two municipalities to enact ordinances that protected residents from discrimination based on sexual orientation. Detroit voters approved such protections in 1973 as part of the city’s new city charter. In 1974, Kathy Kozachenko became the first out candidate to be elected to public office when she won a seat on the Ann Arbor City Council.

Why did you choose a comic book as a form to examine LGTBQ+ history? And how was the process of creating the comic book? 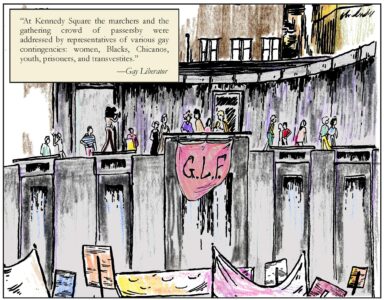 Comic books as a medium can be both accessible and intimate in how they convey stories. As a means of exploring and sharing history, the combination of words and imagery brings the past alive in a vivid, almost cinematic way. In this instance, the text is all quoted with its source immediately evident, grounding it with veracity while also, cumulatively, acknowledging there are competing accounts of what took place. In terms of the illustration, Isabel strove to be true to the people and places as best she could based on surviving snapshots, and she used her imagination to depict scenes where photographs didn’t exist, all the while maintaining fidelity to the history we sought to tell.

What were some rewarding and/or surprising moments in making the comic book?

It was particularly rewarding to witness Isabel engaging with the past with a spirit of excitement and discovery. Her keen eye noticed that one participant in the march was wearing a shirt that read “Super Queer,” a detail I had not noticed. At a time when most people inside and outside the gay community considered the word “queer” to be derogatory, someone was reclaiming it with an air of sass. Another special moment was when Isabel got to meet Merrilee Melvin, the sole paid organizer of the 1972 celebration, who is now 74 and was Isabel’s age at the time of Christopher Street Detroit ’72.

We are so excited to know what is next for this project? What are you looking forward to the most with this project?

We are in the midst of distribution, delivering the 23,000 copies we had printed to more than 100 sites around the state and handing them out at pride events over the summer, including Motor City Pride in Detroit. There are also several events lined up where we get to share more of the story, as well as talk about our creative process. I am looking forward to emptying out the storage unit we’ve rented in Royal Oak of 5,000 pounds of comic books and seeing this previously forgotten LGBTQ+ history find an audience and a home.

Michigan Humanities invites you to visit the Come Out! in Detroit website to learn how to obtain a free copy of the comic book and any other events coming up for this project.