Michigan Humanities is pleased to share our conversation with Joseph Cialdella about his new book, Motor City Green, which dives into the history of urban gardening in Detroit. Joe is part of our Board of Directors and Program Lead for Public Scholarship at the University of Michigan. 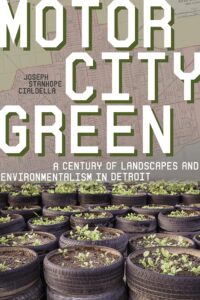 Briefly, what do you see as the main focus and argument of your book?

Motor City Green is a history of Detroit from the late nineteenth century to more or less the present that focuses on parks, gardens, and green spaces as important sites for understanding the city and its people. In the book, I make the argument that residents, city leaders, planners, and organizers used green places to forge human connections and fight the challenges presented by the city’s industrial growth and decline, racial segregation, and economic inequality.

How did you become interested in this topic? What is your relationship to Detroit?

Growing up on the west side of the state, I didn’t have much of a connection to Detroit beyond its fame for making cars. Moving to southeast Michigan for college really started me down the path of thinking about the meaning of cultural landscapes, cities, and the environment. I was fortunate to participate in engaged learning courses where we had the opportunity to work with organizations and learn from communities in Detroit, going beyond the surface to look at the city’s long history of activism and organizing.

I was especially moved by the work being done around urban gardening by long-time residents, many of whom were African Americans. I was struck by the way these vibrant green spaces contrasted with spaces that were vacant of their former uses. Gardens contributed to resident’s sense of place and worked against the misperception that Detroit is an abandoned city. I carried this interest to graduate school, but as a historically-minded student, I wanted to understand more about the gardens, green spaces, and gardeners that came before, and the stories that could help us better understand the meaning of the gardens taking shape in Detroit today. As someone with a humanities lens, I was drawn to the topic because it seemed to be a way to look at the changing reasons why people and communities create gardens and the meanings they give to nature and green spaces in urban and industrial places over time.

Given Detroit’s history of racial division, I was also drawn to the topic because it was a way to more closely examine the assumptions about race, class, and the environment that are often not explicit when we think about gardens and green spaces. I wanted to learn how a piece of Detroit’s environmental past could help us better understand urban gardening and farming as a part of a longer trajectory that led to the city as we know it today. 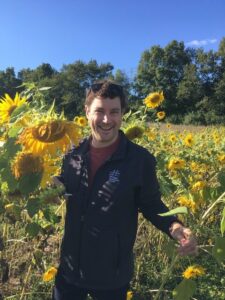 Urban greening can often seem like a new endeavor because there’s so much necessary urgency and excitement around it today. But what was powerful for me in looking at Detroit’s history was the varied ways people came to gardening and environmentalism to try and address social and cultural challenges. The Detroit Urban League, an important African American social service organization, designed and built an outdoor camp for Detroit youth, in hopes it would help improve their social position.

Today, there’s certainly a diversity of people and approaches to urban gardening, but it is more grassroots and community-driven than some of the examples in the city’s past. For example, Pingree’s Potato Patches are celebrated as one of the first successful vacant lot gardening efforts in the late nineteenth century. But they were very different kinds of gardens that what’s taking place in Detroit today. While they were important to nourishing unemployed residents, especially recent Polish and German immigrants, Pingree’s Potato Patches were a top-down plan, conceived by their namesake, Detroit Mayor Hazen S. Pingree.

It’s important to strive toward better knowing what happened in the past, so that our present and future endeavors can aim to learn from what came before. As a movement, urban gardening in Detroit today is more connected and committed to addressing longstanding injustices and challenges like access to food, food sovereignty, and ensuring the city’s African American communities in particular can own land and be a part of  and benefit from the city’s environmental revitalization.

The people and communities I write about didn’t use the language of sustainability. For many of them, urban environmentalism was about surviving, not only economically, but also socially and culturally. Gardening and urban greening efforts in Detroit were ways to create more human, livable places amid the challenging and unjust social condition of industrial growth and decline. Today, environmental sustainability is an important idea, but what I try to illustrate in Motor City Green is that it cannot be detached from social and cultural sustainability. Parks and gardens are not neutral spaces, and neither are plans to create more environmentally sustainable ways of life. They are heavily influenced by our social structures, cultural beliefs, and the divisions and inequities these have created historically that continue today. I think that’s important information for people to know as we think about designing places. How might we better sustain places socially and environmentally? I think it is important to take history, culture, and community voices and visions seriously in how we think about the goals of a version of sustainability that serves the common good, alongside the technological and scientific cases for sustainability.

How was the process of writing your first book? Do you have any dos and don’ts that you discovered during this process and would you like to share with our Michigan Humanities community?

Writing a first book is a long haul, which meant applying a lot of patience and persistence to the process. What really helped me was setting aside dedicated writing time during the week, and breaking down the project into smaller tasks and goals. Although I started the research for Motor City Green as a graduate student, I transformed the research into book while working full time, so the structure and deadlines were key for me. At the same time, taking breaks was also an important part of the process. Making time to be outside and go for walks helps me think more clearly and take a step back, which is important because it’s easy to get wrapped up and overwhelmed when focusing on a large writing project.

For those in the humanities community thinking of writing a book of any kind, I’d recommend connecting with editors and publishers early in the process. They have lots of great advice, and can help you shape the book for success.

If you would like to learn more about Joe’s new book, we invite you to check out the following podcasts in which Joe gets to talk about his book!

Any views, findings, conclusions, or recommendations expressed in this blog, do not necessarily represent those of the National Endowment for the Humanities or Michigan Humanities