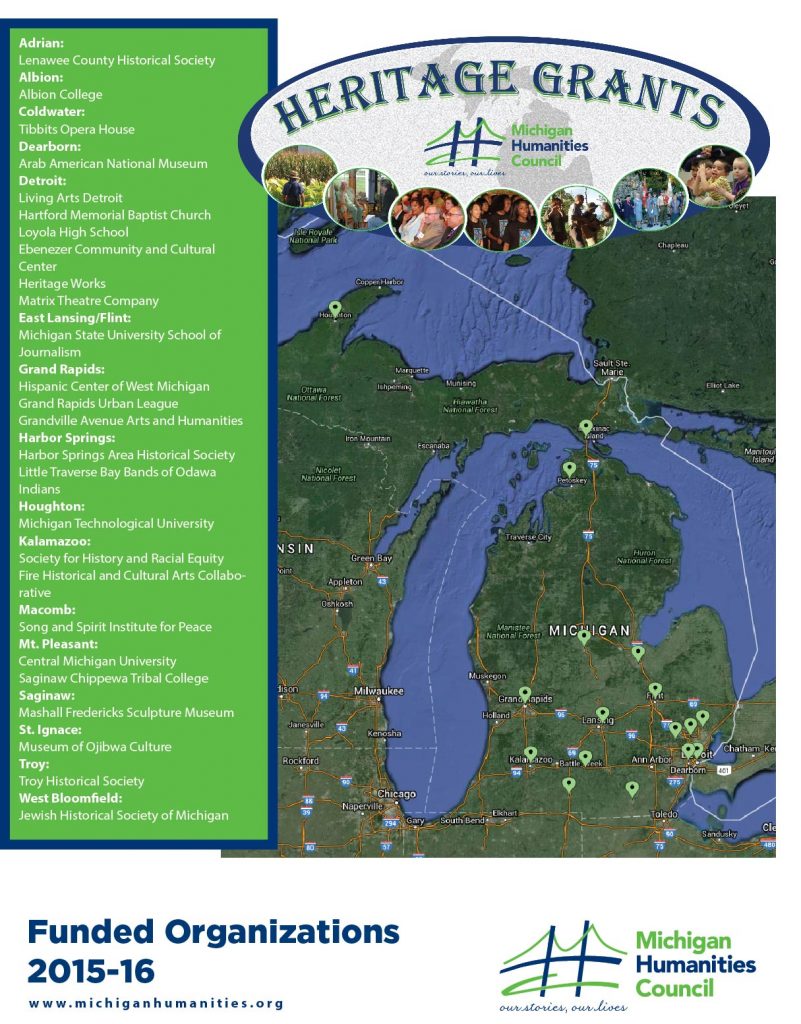 Individuals and member organizations of the Asian community in Troy and Oakland County, Michigan have initiated a partnership with the Troy Historical Society to commemorate the enactment of the Immigration and Naturalization Act of 1965 through a project that involves creating oral histories and community discussions. The project will serve as a template for future projects focused on other ethnicities, races, or cultures, including but not limited to Hispanic, Arab, and Eastern Mediterranean or Balkan immigrant groups.

The project will engage 5th grade students at Clippert Academy in Southwest Detroit in a digital photography and social studies project that allows them to explore, analyze and express their racial and cultural identities through the lens of historic and present immigration of Southwest Detroit’s Latino residents.

The Arab American National Museum (AANM), a project of ACCESS, in collaboration with the Cultural Exchange Network (a consortium of organizations representing diverse communities in Detroit and housed in the AANM), will create 25 “digital scrapbooks,” which will be comprised of approximately 3-5 minute digital videos assembled from scanned images and oral narratives of . The digital collection will narrate engaging stories centered on the themes of “Migration, Immigration, and Displacement” as told by communities represented by the CEN, including African American, Native American, Latino, Arab, Asian, and European communities across the region.

The project includes a year-long public exhibit of Native American art that will also serve as the foundation for a year of programming rooted in sharing the authentic voice of the local Odawa community. Throughout the exhibit, the Harbor Springs Area Historical Society will collect and record digital content from both the traditional artists, workshop participants and the visiting public. At the end of the exhibit, these photographs and video interviews (or oral histories) will be compiled into a short video allowing the public to access it online.

The project proposes to document and preserve the history of Hartford Memorial Baptist Church, particularly as it is connected to the history of the Civil Rights Movement in Detroit/Michigan and to the a larger history of racial inclusion and equity. The goals of this work is to reinforce and revitalize the importance of the cultural identity of HMBC as an example of the Black church as the heart of the community, emphasizing the importance of knowing your history to our young people and people of color by using permanent and traveling professional historical exhibits and stories.

The project will work with the local branch of the NAACP and community groups to create an oral history database and compile stories from those who attended West Ward and remember the era of segregation in America. These authentic stories, along with extensive historical information that has already been documented, will be shared publically via a website that will serve as a repository for the story of West Ward and the fight for civil rights in Albion.

The project will collaborate with tribal and educational organization throughout Michigan to host three “community conversation” events designed to bring Anishinaabe together to participate in traditional storytelling practices. Approximately twenty participants will have an opportunity to create and produce their own digital story from beginning to end using their own voice, pictures, and music and these stories will be shared in “digifests” which will be open to the whole community.

The project proposes to create a comic book that traces the historical roots of contemporary phenomenon in the African American or Black community – hair, tattoos, baggy pants, music, etc. – to understand and build identity among young Black men and women in Flint through the voices of mentors and activists.

The project explores the Latino heritage of their students, community, and Michigan through history and art. The result will be a historically-focused mural project that reveals the authentic voices of the youth participants based on their experiences researching and examining their cultural identity and that of their community

This project includes a series of cultural understanding presentations for students and adults, a series of workshops for Arab-American teens, and an exhibit featuring student work. The focus is on the authentic voice of the Yemeni population in this community.

Jewish Historical Society of Michigan: Michigan Women who Made a Difference ($24,900; West Bloomfield)

This grant request seeks funding for the continued development of the Michigan Women Who Made a Difference (MWWMD) Jewish Women’s Archive and the establishment of the MWWMD JEWISH VOICES Community Project. MWWMD Jewish Women’s Archives is a community-based, statewide campaign to curate and develop content for this historical archives which seeks to document, preserve and share the stories and achievements of Michigan Jewish women whose contributions and struggles have been overlooked or left out of history books.

The project will produce a 28 minute documentary telling the story of the Manda-Bee-Kee Dance Troupe to help preserve the knowledge, stories, traditions and teachings of the traditional Anishinaabe songs and dances.

This project uses a series of Michigan-based examples to educate the public through an exhibit about treaties between Native American tribes and the federal government.

The goal of this project is to use oral history to record the memories of the oldest living African Americans and their related families, in the greater Grand Rapids Area, focusing especially on women.

The project proposes to create a 20-30 minute documentary film that will highlight the voices/stories of African American women who raised young men alone. It will focus on their challenges, strength and pain in doing so. The stories will be recorded digitally.

The project expands the current after-school programing which students in grades 4-12 develop and present projects for the National History Day (NHD) program with the theme Migration and Movement, specifically as it relates to African American history in metropolitan Detroit. The students have the choice of developing an exhibit, documentary, website, paper, or performance as their final product.

Interfaith Council for Racial Justice: The History of Muslims in Macomb County ($25,000; Macomb)

The project will use history to tell the story of a growing but largely under-reported Muslim community that has been living, working, and going to school in Macomb County-a rapidly changing suburban Detroit community. Documenting and then presenting the story of Muslims here will help expand national, state, and even regional understanding of this large number of Muslims residing in Michigan outside of Dearborn.

The project proposes to illuminate black social history in Michigan’s northwestern Upper Peninsula, especially Houghton and Keweenaw counties. Through significant outreach efforts, public programming, an online exhibit and the development of research guides and datasets, this project will shed new light on a previously underrepresented group in the historical narratives of this portion of the state of Michigan.

Museum of Ojibwa Culture: Healing the Past Through Tradition, Arts, and Culture ($25,000; St. Ignace)

The Museum of Ojibwa Culture is requesting funding support to develop a healing program through the arts and culture for Native American people in Mackinac County who have been affected by the destructive and disruptive impacts of the residential school systems known as historic trauma.

Controlling the Narrative seeks to recover and retell the stories of a multi-generational group of black ancestors and descendants through community conversations, video, and a 3-act play all based on the similar themes that emerge out of the narratives of past and present youth and adults of color.

This project will explore stories of Japanese-Americans who were imprisoned in U.S. internment camps between 1942-1945. A three-month exhibit “Manzanar: The Wartime Photographs of Ansel Adams” will serve as the spine for a series of events and discussions led by survivors of Japanese internment camps; radio broadcasts; and documentation of these events shared on social media.

Cultural Scripts, a program of art and dialogue, is designed to engage the people of Detroit and its surrounding communities in the exploration of cultural traditions, normalcy, identity, and empowerment. To accomplish this, Cultural Scripts (CS) will convene local humanities advisors and nationally renowned choreographers, each grounded in a specific cultural tradition yet pushing both creative and cultural boundaries, in Metro Detroit in order to engage African-, Arab- and Latino American audiences.

The Lenawee County Historical Society proposes to create a “dual track” exhibit on the history of immigration in Lenawee County by focusing on two groups: Germans and Latinos. The Museum holds so much of Lenawee’s history and culture, but has struggled to offer a fair representation of Lenawee’s Latino and German populations. This project seeks to establish an understanding of these ethnic roles within Lenawee. It will focus on how German and Latino immigrants have impacted the county through creation of enclaves in the larger community and creation of ethnic based organizations.

Matrix Theatre Company is proposing a collaboration with Detroit’s Latino community to gather and share stories through theatrical performance. Matrix will bring one of the most well–known bilingual playwrights in the country to assist in this work. Caridad Svich is an award–winning playwright, teacher, and activist who is frequently produced in English and Spanish around the country and abroad.

The project proposes to create a youth-driven programing project focusing on the history and experiences of Latino youth in Grand Rapids, specifically centered on the Roosevelt Park neighborhood. Teens in the program will create a series of media and art projects around the themes of racial and ethnic equity, cultural identity, and local history.

The Great Writers project intends to introduce Kalamazoo youth, community members, and educators to established and emerging Black and Latino writers. The project will engage participants in expressing themselves in a variety of literary formats such as poetry, essays and short stories, by learning to identify if and how the history of race and previous authors connects to youth of 2015.